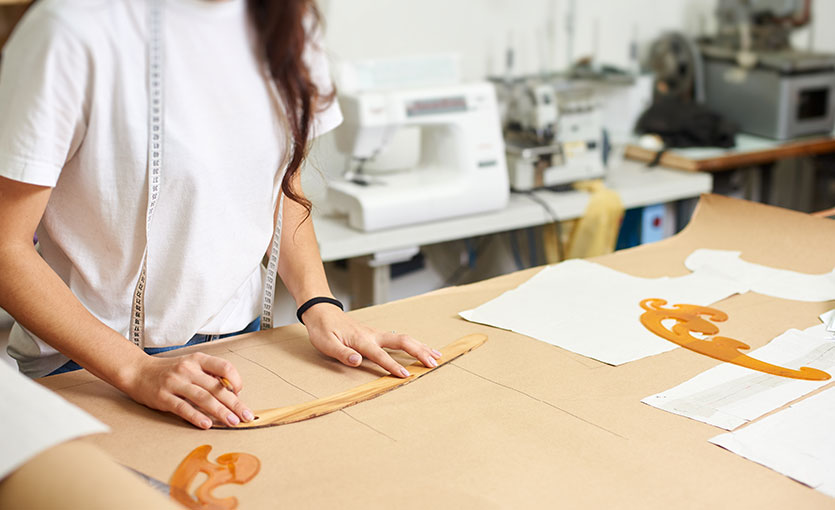 How many times do we think that the clothes we wear have been meticulously planned, designed, cut, seamed, stitched by faceless people who spend hours ensuring that each cut is perfect, each stitch is flawless and each fabric is perfectly sewn? In truth, most of us don’t really think about the finer details of the designs we wear. Most of us go to a shop, choose from a bundle of options, select a garment that we like, buy it and wear it. That’s it. But if you belong to that small percentage of people who likes to know how things are made, want to understand the exciting process of apparel designing, you may be interested in fashion designing and pattern making course.

In popular culture, fashion designers are people with a paper and pen, sketching their creativity and then seeing their final output. In reality, fashion designers do a lot more than sketching. It is a complex process that goes through multiple stages before you see those inspiring designs on your apparels. They must ensure that their idea is conceivable; they have to source the right material, create patterns that justify the design, stitch it professionally and finally ensure the product reaches the right customers.

What is Pattern Making?

A design is sketched on a paper. But that’s just the basic outline of what the final garment will look like. In the design there are technical details that are very important. The cut, seam and measurements of the various parts all make up for the technicality in the process. These are things which when ignored will result to poor quality design output. Pattern Making is the technical aspect of designing which acts more like the blueprint for a garment based on which a fabric is cut. In pattern making, the garment has to be drafted or drawn according to standard sizes depending on dress, forms and figures. Once the technical drawing is complete, they are then converted into 2D patterns using which the fabric is finally cut.

Pattern making is not just another skill that is part of a fashion designing program. Though fashion designers must know everything about pattern making, it can also be studied as a separate vocation. It must be understood that pattern making is a practical and application based subject. It can be a time-consuming and difficult subject to learn in the beginning but once you get the hang of things, the concepts become simplified and easy. It is worth all the efforts that people put in thanks to the career opportunities it opens up for you.

Pattern making became very popular with the advent of ready-to-wear clothing. Since the onset of the industrial revolution, clothes began to be mass produced in factories. Thus now we find the same pattern of apparel in different sizes. This is possible because of pattern making as it works as a bridge between design and production. It is in pattern making that the various shapes and proportions of the human body are taken into consideration while making any apparel.

Thanks to the art of pattern making, a flat piece of fabric can be cut into shapes that do justice to the human figure. A sketch can only be turned into a garment when pattern making is used to interpret the design. It is important that we remember that while a design is sketched on a flat surface, a body for which it is envisioned isn’t flat. It has height, width and depth. The human body looks like a rough cylinder with sudden bulges and curves. It is the job of a pattern maker to take note of the varying shapes to turn a design into a proper, wearable garment.

In order to interpret a design properly knowledge of pattern making is essential. A fashion designer cannot do justice to their designs unless they understand pattern making. It is important to note that pattern making can vary from fabric to fabric, design to design, garment to garment. Even when all these remain the same a pattern that looks good on lean people won’t do so on those with extra pounds around their body.

There are different methods in pattern making that can be used. Flat pattern making and draping are the two most common methods that are used. In flat pattern making accurate measurements are taken from a dress form which is then used to make a pattern on paper. In draping, on the other hand, a specific design is achieved by draping a muslin fabric upon a figure form and then a design is conceived.

For human beings clothing was once just a means of covering the body. A well-fitted garment was never a consideration. As time went by, fitted clothes were almost exclusively worn by the rich. It was seen as a luxury to wear fitted clothes and utilitarian clothing was for all. As the concept of fashion advanced, ordinary people started seeking fitted clothes accentuated their appearance. Comfortable and functional clothing especially created for a body type became much popular. But there was a limitation of dress makers. Only the affluent could afford to hire the services of a dress maker for their personal needs. The rest had to make their own or wear hand-me-downs.

Clothing patterns became known around the late 16th century when Spanish dress makers started publishing clothing patterns in books. Though there were patterns published, they were more of how-to books for tailors. Instructions were provided on cutting, measurement, garment fit etc. They were so technical that home sewers couldn’t use them. In the 1800s things started changing as books for home sewers became popular. There were full-size patterns, final garment images and even pattern drafting instructions. However full-size patterns were not published often. Illustrations and patterns were printed without any scale measurements (more so because there weren’t any standard then) which made it difficult for home sewers to size them according to their own needs.

During the Civil War, tailor Butterick began to mass produce patterns in tissue paper. He ensured that the patterns were made using standard proportional grading system. They became so popular that by 1871 he had sold 6 million patterns. Mass produced paper patterns soon became the norm and McCall joined in the league of Butterick to sell patterns.

Today, a lot of things have changed in pattern making. Advanced technology  and the use of computers has made pattern making easy and accessible. A mention here must be made of the role tape measure played in all this. Until the 1800s there wasn’t any standard measurement for clothing. But as tape measures became popular, it became easier to produce mathematic patterns in three dimensions. Pattern making has helped not just home sewers to stitch their own clothes that are well-fitted but also helped mass produce clothes in different shapes and sizes. Pattern making has made it possible for people to buy ready to wear clothes.

Methods You Must Know in Pattern Making

There are different methods that are used in pattern making. Primarily there are three methods, namely,

Drafting
As the name suggests Drafting involves understanding the basics of measurements and sizing systems. In drafting the basic concept of how to size a body form are highlighted. How to measure chest, hip, waist, etc. are important concepts in drafting. Furthermore, ease allowances are put on paper where construction lines are later drawn to complete the pattern. Basically, drafting lays the foundation of a design pattern.

Draping
Draping is the art of using a two-dimensional piece of fabric to wrap around a three-dimensional body form. Muslin is used in draping which is then transferred to paper to finalize the pattern. Draping is considered an effective technique as it allows the designer to visualize the overall effect of the design before the fabric is cut and stitched. However it must be remembered that draping is an expensive and time-consuming process.

Flat Pattern Making
Flat pattern is the art of developing a fitted basic pattern that is comfortable for a person to wear. The starting point is a sloper which is nothing but a simple pattern that is developed for ease of movement and comfort. For women’s clothing there are five basic pattern pieces – snug-fitting bodice front, bodice back with darts, basic neckline, sleeves, fitted skirt front and back with darts. The basic slopers are often manipulated to meet the demands of changing fashion trends. This method is very popular especially in the ready-to-wear market because it is considered a highly efficient and accurate method.

What Makes Pattern Making So Important
A design is worthless unless the designer takes into consideration the three-dimension figure of the human body and envision how best to make the design look on the human body. The gap between a design and a garment can only be filled when there is someone in between translating the former for the latter. This is that job that a pattern maker does. It is pattern making that bridges the gap between design and final garment. It is that technical aspect whose relevance is hardly known to many. But without pattern making the process will remain incomplete. Not surprisingly pattern makers are deemed very important in the apparel designing and production process and this has made it a desired career option.

What is the Duration of a Pattern Making Course?
Pattern making isn’t a full-fledged graduate or post-graduate course. It is a diploma program offered by most fashion designing institutes lasting anything from six months to one year.

Who Offers Pattern Making Course?
Apart from graduate and post-graduate fashion designing programs, most commonly fashion schools also offer scores of other small-term programs. They are usually designed for those students who seek short-term programs that can give their career the desired boost. Pattern making is one of the popular short-term courses offered by most fashion schools. Nowadays, there are several online courses on pattern making too that are very popular. Though these courses have become very common nowadays, it is better to enroll in a recognized program.  Getting admissions in a reputed and recognized institution will mean that your opportunities widen in the long run. You are also taught by the very best which will help you understand the subject better. Since there are many technical things to learn in pattern making, it is important that you learn from the best.

What Are The Requirements for Admissions?
Pattern making course is open for all. Many institutions admit Class 10 and Class 12 pass outs. You can also be a graduate and still get admitted in a pattern making program. This course is also ideal for fashion designing graduates and post graduates who seek to strengthen their CV. A professional working in the fashion industry can also enroll in such a program.

What Will You Be Taught in Pattern Making?
Pattern making is an interesting subject. It is also very technical. Some of the things that are taught in pattern making include –

During the duration of the program, videos will be shown about drafting and pattern making. You will also have practical sessions where you will be encouraged to cut, draft and drape different types of patterns. 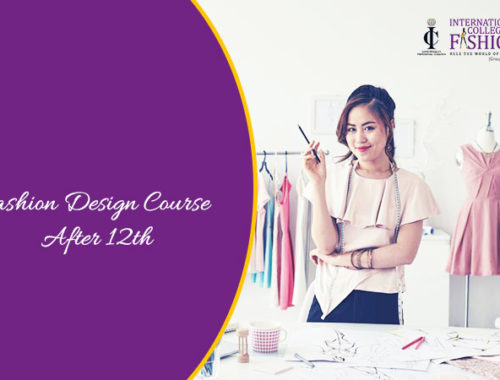 Role of Adaptation in Fashion…

Steps to Find Your Career in Fashion Technology