Kimberly Chrisman in her book – FASHION VICTIMS, talks on how high fashion and high social orders critically met at crossroads of extreme luxury that gave way to the revolution during the 18th century.

As an art historian specializing in fashion and textiles, she has some pretty intriguing takes on the history that came forth as the 18th century French Fashion…..Here is why…..

Marie Antoinette had the eternal bravura legacy, but it was Louis XIV, who ruled in the 17th century, who actually strapped the outline – those red heeled shoes he wore could never be ignored or forgotten. He had prodigious keenness for fashion and expensive things, and believed that giving precedence to such possessions made commercial sense. The French fashion industry grew to be big, powerful, and efficient. King Louis established a system of trade associations and set standards, regulations and structure to the industry. Soon the fashion business had unions that provided society and power.

2. Anything Could Become Fashion Inspiration.

French brothers Joseph-Michel and Jacques-Etienne Montgolfier invented the first hot air balloon in 1783. A bag of hot air might not seem a likely source of fashion inspiration, but it sure did, with the industry hoping to ride the coattails of the popular innovation. Montgolfière even became a term in hair styling.

3. Fashion Magazines Came Out Every 10 Days.

Imagine if Vogue was published every week…. In the late 1700s, fashion magazines managed to make the rounds despite having a narrow group of subscribers in the most elite circles. Servants would then read the latest news and maintain the already fast moving fashion cycle.

4. Everything Was Outdated Immediately.

Hat makers, (known as the milliners), served a hugely important role in 18th century fashion, both in defining the look of the time and driving it frontward. They gave their styling topical names to set them in a specific place in time. Any new accessory or trimming had a ticking clock on it from the moment it was sent out into the market. This “planned obsolescence,” as Chrisman-Campbell calls it, gave milliners incredible power over the industry and ensured a steady stream of clients.

5. Everything Was Custom, And Everyone Was A Designer.

People would work with hat makers, dressmakers, and sometimes even fabric salesmen to create one-of-a-kind articles. Marchandes de Modes became powerful in the framework of the association system since even though the dressmakers could only shape a dress with the same fabric as a rule, a Marchandes de Modes could make it with whatever material but not sew a dress (not legally back then). They delivered assortments and customization that made them highly pursued.

Secondhand clothing was legitimately regular among the rich, and a lot of people were wore pieces that were formerly owned twice or even three times before. Flea markets were popular destinations, and Marie Antoinette’s ladies-in-waiting were lucky enough to score her hand-me-downs, which they would wear or sell. The fact that servants often wore the garments their masters had been sporting recently speaks to both the importance and the disposability of fashions at the time. The industry was moving at rapid speeds.

7. The Pouf Was More Than A Look—It Was A Statement.

The iconic pouf hair styling of the time—with their feathers, flowers, ribbon, lace, jewelry, fruit and other miscellanea—weren’t just about looking cool or displaying wealth; they were meant to be a reflection of personal and cultural events, or even important events in social life or politics such as the American Revolution. Topical fashions extended to fans, men’s waistcoats, and even gowns.

8. Rose Bertin Was A Rockstar Designer Of The Time.

Bertin was a milliner who was introduced to Marie Antoinette by the Duchess of Chartres and, from there, became one of the “it” designers in Paris. She charged a lot for her work and even had servants and a carriage. As someone who started out in a lower class, Bertin’s ascension to life among the royals was a subject of controversy. She was also unique in that she dressed the queen as well as others, which was previously not allowed. Marie Antoinette wanted Bertin to be a part of the world of fashion, which is why she didn’t demand exclusivity.

9. Black Was The New Black.

During the 18th century, being in mourning was often more about etiquette than actual grief. Widows stayed in mourning attire for a year, and it was customary for the entire court to don funeral wear if any member of the European royal family died. Black was in such regular rotation in the outfit color scheme that people got quite used to it and began to value its practicality. As mourning traditions started to fade, black became a color of everyday dress.

When Napoleon became the Emperor in 1804, he wanted to return to the fashionable days of Louis XVI as he believed encouraging the industry would help with the economy. He brought back luxurious dress and helped to breathe some life back into a facet of business and society that had been striked out during the boisterous years of the French Revolution. 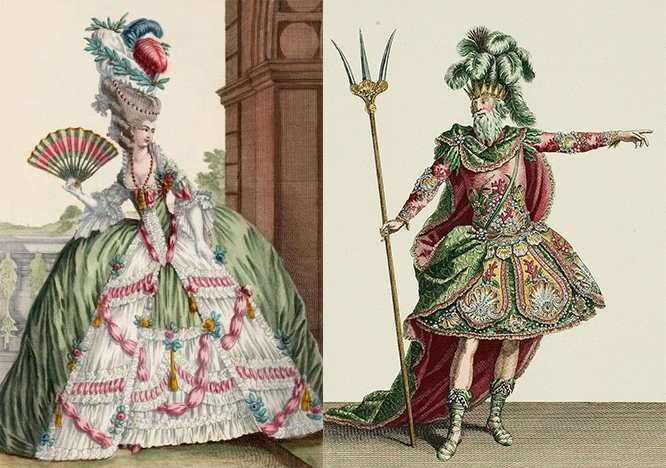 Decision On College Will Make You As Best Fashion Designer

How to accomplish your career in fashion designing courses?